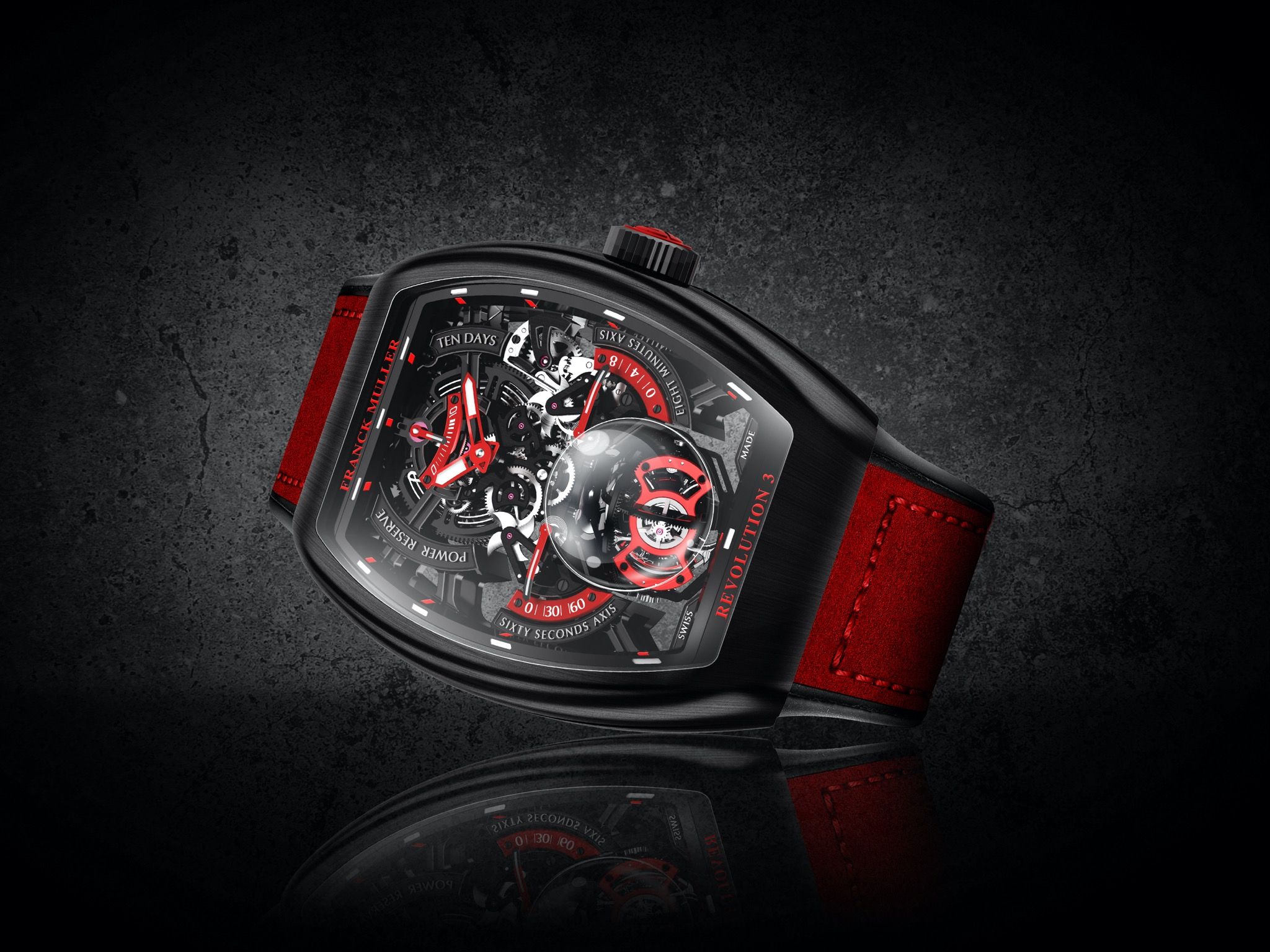 The Revolution series of tourbillons by Franck Muller represents some of the most ambitious, radical and astonishing achievements in the history of contemporary watchmaking. Today, Franck Muller unveils the Vanguard™ Revolution 3 Skeleton, that offers an exceptional technical spectacle as well as emotions only to be found at Franck Muller.

Featuring a breathtaking skeleton movement, this timepiece stylishly reveals openworked black bridges and red aluminum indicators that allows to observe one of the most beautiful mechanism in all of Horlogerie.

This triple axis tourbillon corrects the force of gravity in all positions, contrary to a classic tourbillon which only compensates it when the wristwatch is in a vertical position. This complex system of carriages is a technical marvel and is the result of one of the most complex creations in Haute Horlogerie. Dominating the lower half of the movement, the extraordinary triple axis tourbillon slowly turns through the one-hour, eight-minute and 60-second cycles of its respective three carriages. This highly complex mechanism makes the Vanguard™ Revolution 3 Skeleton a wonder of precision and above all a masterpiece of micromechanics.

Power flows from the gear train through all three carriages to activate the balance wheel five times each second. As the Revolution 3 has three carriages, the gear train has significant resistance to overcome. So as to provide an abundance of energy to drive this triple axis tourbillon, the movement was given a massive 10 days of power reserve. Furthermore, there are two retrograde indications at 4 and 8 o’clock for the progression of the eight-minute carriage and the 60-second carriage.

Housed for the first time in a Vanguard case, this timepiece features a unique sapphire dome on the front and back of the watch, allowing to further highlight the magnificent triple axis tourbillon. The Vanguard case, made of grade-2 titanium, is treated with black PVD coating. The strap, made of red Alcantara®, effortlessly takes the shape of the wrist and perfectly complements the red decorations on the movement and the Vanguard case.

Wholly designed and manufactured in-house, the futuristic design of the Vanguard™ Revolution 3 Skeleton is a mechanical treasure showcasing the exceptional know-how Franck Muller manufacture. The new Vanguard™ Revolution 3 Skeleton comes with Franck Muller’s 5-year tourbillon warranty and is delivered in a very special box with an automated opening system.

About the Cintrée Curvex Revolution 1: Elevating the Art of the Tourbillon

From the very beginning, Franck Muller understood the emotions that a twirling tourbillon brings to a watch owner. And emotion is the reason why Franck Muller produces mostly flying tourbillons, because without the upper bridge you have a much clearer view of the tourbillon mechanism. But even so, Franck noticed that tourbillon owners were always bringing their watches right up to their eyes so they could peer inside this mechanical universe. He wondered if he could create a tourbillon that rose up out of the dial, so the owner could have a better view of the mechanics of the carriage. He began experimenting with this idea and came up with an extraordinary mechanism, the Revolution 1. By pushing the button on the left-hand side of the case, the tourbillon carriage rises up until it is just a few microns from the underside of the upper sapphire crystal. Look from the side and you are able to see that the balance wheel is fully elevated above the level of the watch dial. The result is a view of this horological complication like never before.

Franck faced one major challenge during the conception of the watch. The watch’s hands could be damaged by the tourbillon if they happened to be over the aperture when the button was pressed – for instance at 6 o’clock. So he decided to create a system whereby no matter where the hands were on the dial, they would leap to 12 o’clock to ensure that they were not in the way of the rising

tourbillon carriage. But even more importantly, when the button is released, the hands would jump back to the correct time position without losing a single second of accuracy. While this sounds straightforward enough, the underlying technical challenge was extreme. Getting the hands to jump back to the correct time was far harder than simply causing the tourbillon to rise. Franck’s solution was to design a system similar to the return function found in a split-seconds chronograph. He essentially had to make two rattrapantes – one for each hand – which is why the Revolution 1 was such a difficult watch to develop.

Thus, for Franck Muller, the success of the ensuing Revolution 1 demonstrated the still-untapped potential of redeveloping the tourbillon for the contemporary consumer. The acclaim received by Revolution 1 soon paved the way for what would become one of the most significant horological breakthroughs of the new millennium: the first-ever multi axis tourbillon wristwatch.

About the Cintrée Curvex Revolution 2: The Double Axis Tourbillon

The tourbillon – or “whirlwind”, as it translates literally from French – is the most richly researched, lavishly praised and universally revered complication in high watchmaking. It consists of a carriage in which all the regulating organs of the mechanical watch, including the balance, the hairspring and the escapement, are placed. It then rotates once on its own axis every 60 seconds to compensate for the errors caused by gravity in these components when the watch is in a vertical position. Since it was designed for the pocket watch, the classic tourbillon can only compensate for the negative influences of gravity in a vertical position. Therefore, after many months of research and development, Franck Muller unveiled the Revolution 2, the wristwatch version to the tourbillon. The Revolution 2 revolves around two axes and thus compensates for the effect of gravity not only when the watch is vertical, but also horizontal. This innovation brought new relevance to the tourbillon in wristwatch form.

About the Cintrée Curvex Revolution 3: Transcending the Third Dimension

As it was conceived for the pocket watch, the tourbillon was designed to operate in a vertical position. With a wristwatch, however, the “usual” position may vary considerably depending on the wearer’s movements and this, in turn, can give rise to significant variations in operation. Thus, in 2004, after years of development, Franck Muller revolutionised the watchmaking industry by making the world’s very first triaxial tourbillon. Franck Muller engineers went beyond the Revolution 2 to create a true masterpiece. The Revolution 3 offers an exceptional technical spectacle as well as emotions only to be found at Franck Muller. This triple axis tourbillon corrects the forces of gravity in all positions, contrary to a classic tourbillon which only compensates when the wristwatch is in vertical position. This stunning complication is the result of one of the most complex creations in Haute Horlogerie.

About the Franck Muller manufacture

Founded in 1991 by master watchmaker Franck Muller and a watch case specialist Vartan Sirmakes, the Franck Muller manufacture is one of the most acclaimed independent watch companies in contemporary watchmaking. An award-winning brand, Franck Muller is known for its highly exclusive technical complications, which are proprietary innovations, produced in-house within its manufacture in Genthod, Geneva. From the Revolution 3, the first triple axis Tourbillon, to the most complicated watch in the world, the Aeternitas™ Mega 4, Franck Muller created exceptional timepieces that left its hallmark in the story of Swiss watchmaking forever. With more than 50 world premieres and patents, Franck Muller has been dazzling the world with creations that have been received with great enthusiasm by watch connoisseurs and celebrities alike throughout the world, and designs that represent major technical advances in the history of Haute Horlogerie.